In Washington State, May was officially recognized as Asian Pacific American Heritage Month in 2000 by the Washington Legislature. In 2021, both U.S. President Joe Biden and Washington Governor Jay Inslee proclaimed the month of May to be Asian American Native Hawaiian and Pacific Islander Heritage Month (AANHPI).

A 2019 report prepared for the Washington State Commission on Asian Pacific American Affairs found that 12.3% of Washingtonians identify as AANHPI (alone or in combination). In Clark County, Asian, Native Hawaiian and Pacific Islanders make up 5.39% of the population. In Cowlitz County, ANHPI individuals constitute 1.48% of the overall population and 1.87% in Wahkiakum County.

In Washington, AANHPI individuals have a long and storied history. Originally Chinese populations were drawn to migrate to Washington by news of the Gold Rush and drawn way from their home country due to the civil unrest during the Taiping Rebellion. During the late 1800s, Chinese immigrants were working on railroads, logging, mining and in salmon canneries.

While Asian Americans and Native Hawaiians contributed to the prosperity of the Washington economy, their communities often faced adversity. The Chinese Exclusion Act of 1882 barred Chinese laborers from immigrating to the United States. The act was not repealed until 1943. The 1924 National Origins Act restricted Asian immigration even further.

In 1942, U.S. President Franklin Delano Roosevelt ordered the internment of individuals of Japanese ancestry. The wrongful internment spanned four years and affected the lives approximately 120,000 people—the majority of whom were American citizens. No interned Japanese Americans were ever found guilty of espionage. It would not be until 1988 when Congress would issue an apology and reparations to as part of the Civil Liberties Act.

After World War II, sentiments on Asian immigration began to shift. During and after the civil rights movement, members of AANHPI populations blazed their way to new successes and greater political representation.

In Washington State, the population of Asian Americans, Native Hawaiians and Pacific Islanders grew 34.3% between 2010 and 2019. 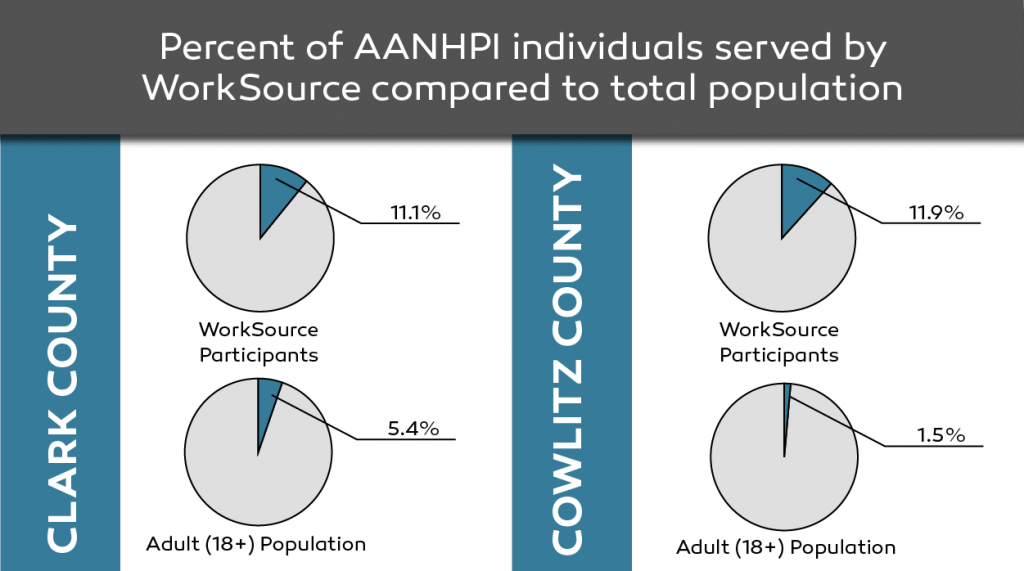 Workforce Southwest Washington (WSW) invests in adult career and employment services through two WorkSource centers. Of the participants served at WorkSource in Clark County during 2020-2021, approximately 11.1% (174 participants) were individuals with AANHPI heritage. Comparatively, individuals with AANHPI heritage represent 5.4% of the total adult (18+) population in Clark County. That individuals of AANHPI heritage are needing public workforce system services at a larger percentage than their representation in the region’s population suggests a need for increased economic opportunity, career services and resources.

Through location-based services, focused outreach and customer-centric program design, WorkSource has been successful in serving AANHPI populations at a rate higher than the group’s population make-up in the three counties served.

In addition, WorkSource and WSW’s Next youth career center offer translation services to ensure that individuals without English proficiency are able to access and receive quality employment services across the region.

To help create our vision of a region where economic prosperity and growth exists for every person, WSW continues to evaluate our investments, tailor programs and services and prioritize the needs of historically excluded or underserved populations. Our grants for employee training prioritize workplace equity and require businesses that apply have at least 20% of employees from historically-excluded communities.

Our Job Seeker Services Request for Proposals (RFP), released in January 2022, took a new investment approach and aimed to increase accessibility and strengthen WSW’s commitment to inclusion and equity by utilizing a population-specific co-investment strategy to serve people where they are and create community ownership and a greater representation of the region’s diverse communities.

Keep up with the latest from Workforce Southwest Washington